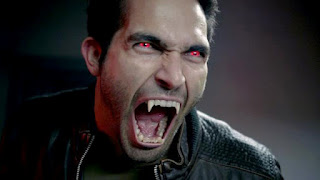 By the very nature of the word 'recap' there are spoilers throughout.


Teen Wolf’s second episode wastes no time diving into the home life of new character Isaac. As if the mystery black eye wasn’t enough of a hint to what that’s like, we were given the full-on movie of the week treatment as Isaac’s father became increasingly angry when demanding to know all of his son’s current grades. When they were not up to his standards things got really theatrical really fast as his father smashed up dishes for Isaac to clean up, alongside threats of ‘taking this downstairs’.
You get to find out what’s downstairs later on, and it’s really not a testament to good parenting. During the altercation Isaac suffers a stray shard to his cheek which he pulls out and boom it’s healing before his father’s very eyes. Seems that trip to meet up with Derek at the end of the premiere bore the fruit of a new werewolf and he’s just been pushed too far.

Isaac’s father goes after his son and he receives an epic mauling for his need to be an asshole no matter what. There’s an intentionally vague shot of the threat before it attacks which is meant to keep us wondering if it really is Isaac’s teeth and claws that caused the man’s end.  It’s that or there’s still some unknown threat ripping into people at Beacon Hills, but now we know that Derek has at least one new member of his pack.

While that’s going on, the Argent family plans a surprise parent-teacher conference with principal Thomas. And by that I mean they abduct and cattle-prod him. Later on we learn that they removed the principal in order to install Grandpa Argent in his place. It's a piece of classic war-time maneuvering as we’ve seen on this show that the high school itself is so often ground zero of werewolf activity.

Unlike some other shows (*cough* The Vampire Diaries *cough*) the characters actually attend classes and participate in their extracurricular activities enough that you still believe they’re just teenagers. At the locker room before lacrosse practice, Scott manages to sense that there’s another wolf in the vicinity and he and Stiles concoct a plan to sniff him out.

During practice Scott manages to actually tackle and catch the scent of his various teammates until he finds out that Isaac is the new wolf. He also gets to share another of many delightful homoerotic moments with Danny (can Danny please have his own storyline this year and not just be the guy who always knows where Jackson is?) But when the cops show up it’s too late for Scott to do anything about helping Isaac as he’s hauled away as a person of interest in his father’s murder. Obviously this is problematic as that night is a full moon, so Scott enlists his friends to try and keep Isaac from harm’s way.

Not before Stiles and Scott get one-on-one time with our new big Bad, Grandpa Argent, at the principal’s office. It must have taken a lot of self-control for Stiles especially not to ask how the hell that came to happen overnight, but he’s too busy putting himself into position to take the detention bullet for Scott so that he’s free to learn more about Isaac’s situation before tonight. In fact when Scott leaves the school he’s met up with by Derek in his slick ride all, ‘get in loser we’re going investigating.’

While they poke around Isaac’s abandoned house Derek takes the opportunity to remind Scott of what most of us scream to the screen about: he and Allison and how much of a bad idea it is. Derek explains to him that it’s going to end badly, and if he can follow him around so easily without being detected than what’s to stop the hunters from doing the same? As usual, Scott refuses that he’s doing anything stupid but Derek gets the chance to shed some light on what Isaac’s home life was like. Let’s just say that when Isaac got in trouble that it wasn’t his room that he was sent to, but instead he was locked up in a thankfully non-functioning chest freezer. There is a grisly collection of desperate fingernail scratches on the inside of it along with some bloodstains that show exactly a. why Isaac’s father’s death should have been loudly cheered for in the beginning, and b. how much darkness Isaac the wolf is carrying around with him.

Scott already mentioned earlier to Stiles at lacrosse practice that the difference between himself and Isaac is that he can sense that Isaac wants to do harm. It seems that with this new character we’re getting an idea of what a ‘shadow’ Scott would be like. Their growly confrontation during practice is clearly foreshadowing that these two are going to be at odds with one another throughout the season. This will be especially true when Isaac likely starts using his newly realized wolf skills to show Scott up in lacrosse and possibly other areas of his life too.


Stiles gets out of detention in time to receive a text message from Allison. It’s a box with the wolfsbane symbol drawn on it so he quickly hurries to get to Isaac at the local jail before a hunter can first. Allison uses her archery skills to try and slow down the hunter impersonating as a deputy but even after an arrow in his tire and in his leg the man is undeterred and on his way to kill Isaac.

Thankfully, not only does Stiles get to the jail before the fake deputy but Derek is there as well. They share an awkward moment when trying to figure out how they can get into the jail and release Isaac. I can’t be the only person who really wished that Derek would have rehearsed his chat-up routine for the conveniently female desk duty officer on Stiles before they walked in, right? Sadly it wasn’t to be, but his wolfish charm manages to distract her so that Stiles can get in.

Meanwhile, Allison winds up at Isaac’s house to meet up with Scott before he turns. She helps to chain him into Isaac’s time-out box before he can turn all the way, however they’re not alone. While Scott is locked up Allison wanders the house in the dark because apparently turning on a light doesn’t provide the right suspenseful ambiance. Her flashlight even loses battery power before she’s cornered by something with glowing eyes. At first we think oh it’s a wolf on the loose because, hey the show is called Teen Wolf. Instead we see that the series is interested in exploring other types of supernatural beasties and are greeted with the sight of a…what the HELL is that? A brief shot of some sort of lizard creature skittering away from Allison and newly free Scott leaving them and us to wonder just how messed up things are going to get this season.

At the jail, Stiles and Derek’s plan manages to mostly work as the hunter is down. We see that Isaac’s blood lust is going to be a problem, however, as the only that kept him from attacking Stiles was Derek’s Alpha badassery. We leave the scene with Stiles left alone with the body when his father shows up to the less than ideal scene.

Oh, while all this is happening Jackson’s still off on his own plot-line trying to deal with the possibility of shifting. He gets a digital video camera from random classmate Matt in order to document his first full moon. Unfortunately, he wakes up in his own bed with nary a scrap of evidence supporting anything happening during the full moon. He throws a hissy fit and we’re left to wonder if perhaps Jackson’s strange physical issues have something to do with the lagoon creature running around now. After all, we did see him emerge from a lake this year, and his possible transition hasn’t exactly matched that of a wolf. Whatever, right now it mostly gave us an extended scene of Colton Haynes in his underwear and I think that’s what the viewers were most pleased by. In this new more dangerous world for our favorite characters I'd be perfectly fine if Jackson isn't actually turning into anything at all. I don't want to miss seeing him on my screen every week.
Posted by Keysha C. at 11:34 PM