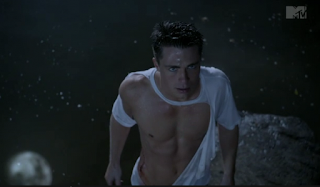 Since it’s Teen Wolf’s regular night, and Sundays are crazy-full TV nights for me, I watched the repeat of the premiere as well as the new episode to recap them both. You can find the recap for Shape Shifted here. By the very nature of the word ‘recap’ beware of spoilers for both ‘Omega’ and ‘Shape Shifted’.  Previously on Teen Wolf: Scott’s relationship with Allison has gone into hiding because of her hunter family being a bunch of sadistic jackasses, Jackson and Lydia both were dealing with some strange supernatural confrontations, and Derek is the new Alpha on the block.

We pick up where the story left off with Lydia in the hospital following the vicious attack she suffered last season. Stiles is still holding a torch for her in the shape of a get well soon balloon clutched in his fist as he waits for her to wake up. After she does she goes off to hop in the shower, but unfortunately for her it seems that’s not the best idea. Within moments, Lydia’s relaxing shower turns into a very bizarre stint with a bathtub full of murky water. Oh but it gets better, she also starts pulling long strands of what I presume to be ‘wolf-like’ fur from the drain before a bloodied hand reaches out for her from the depths. She freaks and bails which leads to half of the episode being about the hunt for the likely new wolf-in-transition by her friends and the hunters in town.

Especially when bodies start winding up with pieces missing from them.

A memorable scene in the graveyard introduces new character Isaac, who figures more prominently in episode two, as a young gravedigger that escapes mauling by the mystery creature. He also meets Derek during and if there’s one thing we’ve heard time and again, it’s that Alphas want to form packs so it’s easy to see that Isaac being on Derek’s radar is a notch for his eventual recruitment. We get to learn a fair bit about Isaac when he’s interviewed by Sheriff Stilinski. He plays lacrosse, he goes to Beacon Hills High School, and he has a mystery black eye along with a domineering father. Be sure that we’ll be seeing more exploration of their story as the season continues.

While Lydia’s missing for a couple days, Jackson has his own post-bite problems to deal with. Spontaneous nosebleeds are the start of the trouble, but soon it’s a full blown condition as he goes rapidly through tissues for a much different reason than most teenage boys. Derek claims his body is fighting the bite, but when he backs away from Jackson after a typically slashy confrontation with him in the men’s room at the school it’s clear that even he isn’t quite sure what’s happening to him.  Things remain ominous with Jackson throughout the episode, but he’s definitely pissy that things aren’t going his way. Colton Haynes plays an entitled arrogant jerk with such conviction you can’t even decide if you actually want him to transform, or if you want him to go on without.  Just so the spoiled brat can go about not getting what he wants for once in his life.

Allison and Scott continue sneaking around, and not very well, to pursue their forbidden love or whatever. People really dig this kind of storyline, but it’s absolutely the worst thing that Scott can do and everyone knows it. He’s essentially poking the bear that is the Argent family of hunters. They think they’re being so clever with Allison playing the sad girl act around her parents, but instances like Scott sneaking into Allison’s aunt’s funeral are just asking for trouble to come their way. That trouble can be found in the form of Allison’s grandfather coming to town.

Enter Michael Hogan who cuts ever an imposing badass figure even without his BSG eye-patch. I mean, his character’s name is Gerard Argent, the man has two ‘Arrrgh's’ in his name. So you know he's aggressive even before he slices an Omega (the rare lone wolf) clean in half. He rejects the often mentioned, yet never elaborated on, code of the hunters and proceeds to declare war as Derek and Scott look on. Derek tries to use this to convince him to join his pack, but Scott still refuses.

The theme of the episode is that Scott’s going to have to learn he can’t survive on his own, and he’s going to need to get his priorities straight. Even following two threatening confrontations with Allison’s father, Scott is still stubbornly trying to have his relationship with Allison. Even in the midst of this new hunter-heavy climate and that just leaves me shaking my head at the choices of a love-sick teenage boy. It’s going to end badly, that much is clear. Scott himself even mentions that when a wolf is in a pack it amplifies a wolf’s own abilities. How is this not incredibly obvious Scott that you need to swallow your pride and join up with Team Derek? It’s the only way he’s going to have the shadow of a chance of surviving this as things on Teen Wolf are firmly hinting at being much darker this season for all involved.