Sometimes, TV mimics real life circumstances and vice-versa in terms of big events happening on both and there’s no rhyme or reason as to why that is. While Sandy ravaged the East coast today in 2012, back in 1964 a nasty nor’easter blew through town and trapped everyone inside the walls of Briarcliff Manor. What unfolded during the first and last movie night at the asylum was a dark and stormy night of twisted motivations, guilt coming to the surface as long-kept secrets were revealed, and an escape attempt (a better one than last week, they got outside this time!)

First and foremost, bless me Ryan Murphy for I have sinned against thee.

This week on Revenge, secrets start threatening to spill out all over the place especially when it comes to Amanda’s identity.  I also start to worry that the show is about to pull the same trickery it did last season.

'Once Upon A Time' 205 Review: Dr Whale Revealed

In case the completely different title card wasn't enough of a clue, ‘The Doctor’ doubles as the Halloween episode for Once Upon A Time. It also finally gave up the answer to one of the most pervasive questions in OUAT’s mythology thus far: who the hell is Dr. Whale? In doing so, it showed that there’s often far more interesting stories in the flashbacks of other lands, both fairy tale and something else entirely, than there is in the present-day.
Read more »
Posted by Keysha C. at 10:41 PM No comments:

Previously on The Vampire Diaries... wait we don’t have that intro anymore we have this this is Mystic Falls recap.  Am I the only one who finds it annoying?  I digress.  This week on The Vampire Diaries we see that the new hunter in town means business, Everyone who wants to leave town can’t, and Matt almost dies...twice.


What happens when a large company’s C.O.O. goes missing and they want to keep it quiet?  They call in Sherlock Holmes of course. But then what happens when a disappearance turns into a murder and that murder indicates a string of murders that point to someone climbing their way up the company’s corporate ladder?  Well then you have this week’s episode of Elementary.

If you thought that last week’s season premiere of American Horror Story: Asylum threw way too many characters and stories at us then this week gave us more of what the show’s weekly rhythm may resemble. When a severely troubled patient is brought inside Briarcliff Manor, the procedure involved in his healing unearth dark secrets, keep a new character around, and give some of our favorite inmates their first real chance at escape. Plus more Pepper!

If you caught the season premiere of American Horror Story:Asylum this past Wednesday then you already know that Adam Levine's character Leo suffered a bloody fate. After watching the scenes with the Lovers play out, it's a little difficult to hear a Maroon 5 song without thinking about that grisly image. After a conversation on Twitter brought up how funny it is to hear 'Harder to Breathe' right now in the wake of the events on Asylum ("is there anyone out there cuz it's getting harder and harder to breathe"), we thought there's probably other Maroon 5 lyrics you can pluck right out of their poppy context and view them in a manner that's far more sinister. Here we have five Maroon 5 songs with lyrics that can now have double meaning thanks to the delightfully warped minds of Ryan Murphy and the writers of American Horror Story:Asylum.

This week on Revenge, someone takes a nearly deadly tumble, the band-aid gets ripped off past traumatic memories, and we force a little chemistry with a bit of grief bonding in a number of storylines.  Oh, and let’s not forget the long con that’s been quietly playing out in the past few episodes.


Avast me hearties, it’s time to set sail for a brand-new episode of Once Upon A Time. That is the extent of the pirate talk in this review, I swear. This week was the moment many of us have been waiting for since July when the Comic Con teaser informed fans that this season we would be getting the OUAT version of Captain Hook. But that wasn’t the only story to be told this week as the primary focus of the hour was a story about Rumplestiltskin, mainly how he lost his first love, Milah, to the swarthy pirate captain and the exciting life he could offer her.

Only two episodes into this season of The Vampire Diaries and it’s pretty clear what the running theme is going to be.  If we had just listened to Damon in the first place, then things wouldn’t have been as hard as they are now.  That says a lot considering for the longest time Damon was the captain of bad ideas which included hiding the moonstone in his soapdish.

This week’s episode of Elementary offered a twist to the usual formula we’ve seen so far.  In the first two episodes our criminals were both motivated by greed, and I expect most of the cases we’ll be dealing with on a week to week case on Elementary to be similar crimes of avarice.  However, this week we met our first true psychopath, a wolf in sheeps clothing.

All week long I kept up with the latest reviews of American Horror Story: Asylum. So many TV critics and bloggers prefaced every post with the fact that they weren’t fans of the show’s first season of sexual mayhem and violent ghosts over at the Murder House. It wasn’t for everyone that’s for certain but I fell in love with the exploits of the Harmon family and the people who changed their lives forever both living and dead. Sure, it was bat-shit crazy and sometimes it could be incoherent, but it was hugely entertaining in the way it embraced a true anything goes mentality.

Asylum opens in Massachusetts in the year 1964, and we are thrust into a landscape where the characters don’t only need to stay away from a single house in order to stay safe and sane when the entire world is against certain types of characters.
Read more »
Posted by Keysha C. at 11:34 PM No comments: 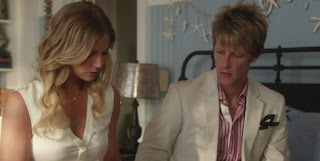 This Sunday’s episode of Revenge was all about ‘Confidence’.  It made me question if we should be confident in one character’s weird storyline, another’s pending romance, and the possible real paternity of yet one more character.

Tonight’s episode of Once Upon A Time dealt with a family that’s been torn apart across two vastly different lands trying to get back to each other and keep themselves safe from the dangers of both lands while doing so.  We were given the chance to see far more of what’s left of the Enchanted Kingdom, there was a touching reunion between one of our favorite OUAT characters and their dearest loved one, and there were also ogres which are apparently far more deadly than giants even though they’re blind as can be and hunt only by sound so maybe a certain character shouldn’t be playing around with her gun in this far-off place. For the sake of narrative clarity, each part of this recap will separately deal with the three places our story currently takes place: Enchanted Kingdom past, Storybrooke present, and Enchanted Kingdom present.

For four years now The Vampire Diaries was the standard for teenage demographic-skewing supernatural entertainment on television. People compared the series to True Blood along the way and though in some ways this was an apt comparison—hey they both have vampires in them—it felt like something unique. It suffered from the presumption of many that it would be Twilight for television—the marketing did nothing to assuage those fears as the focus was on the sad pretty girl who would find herself torn between the love of two pin-up worthy vampire brothers. But something happened somewhere in the first ten episodes of season one—The Vampire Diaries became one of the most engaging dramatic thrill-rides you could find anywhere in genre television. It was easy to defend to the haters who thought that it was simply a televised rip-off of the Twilight novels because it was filled with rich characters, surprising storyline shifts, and a growing mythology that wove those characters into the history of the town of Mystic Falls, Virginia.

Somewhere in the last season however, the wheels began to fall off of the storytelling, many of the characters became one-note versions of their former selves, and hardly anything that would be built up story-wise had a single real consequence attached to it. There are a number of factors that could be blamed for this decline, but the issue here is here we are in season four with a brand new chance to redeem the less than stellar season three…did they do it? 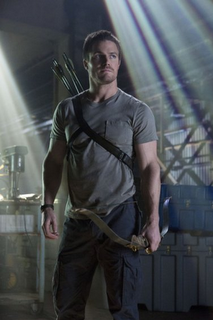 In the CW’s latest offering, Arrow, Stephen Amell takes on the titular role of the vigilante hero from the DC comics universe. The creators of Arrow have decided to go with more of a Christopher Nolan way of handling a superhero story and make theirs a world free from superpowers in order to tell the tale of presumed dead wealthy playboy Oliver Queen. As he makes his return to his home town of Starling City in order to defend its citizens from corruption and greed as well as find personal redemption as his alter ego Green Arrow.

On this week’s Revenge we once again see that you can’t keep Emily Thorne down, even if absolutely nothing is going according to plan.

Following the spectacle of the season premiere with its twist endings, new (old) lands, and family reunions long in the making this week’s Once Upon A Time episode ‘We Are Both’ settled in to deal with a town whose people are in many ways as broken as the curse that once held them from their former lives. It focused mainly on Regina and Charming as each dealt with a bit of an identity crisis now that the curse has been broken.


“I did the fighting, Snow did the talking.”

That’s a quote from Charming/David when he explains to Red/Ruby his frustration with trying to lead the town now that things have changed so dramatically for everyone.

Elementary 1.02 “While You Were Sleeping” Review 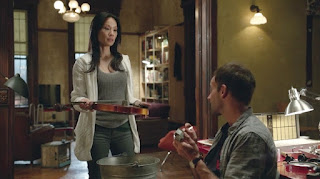 Elementary returned for it’s second episode and we get the chance to see if it can stay on par to the pilot.  We also get quite a bit of insight into what Holmes and Watson’s relationship is going to be like this season.

Revolution 1.03 Review: 'The Power of Pellegrino'

All it really takes for a show on the edge of being something truly worth tuning in for every week is that one great episode. Did Revolution achieve that? Not quite yet, but they did make a lot of progress from the first two episodes in ‘No Quarter’ that gives me just a little bit more hope in spending my Monday nights in the blackout future.

We all know magic is back in the real world of Storybrooke, Maine because that’s been the key to the Once Upon A Time season 2 promotion efforts. All the posters and teasers have told us that magic is back, but what was less certain was the price that must be paid for this to have happened. There are rules to how magic can be used in the real world and that’s not the only trick up the creators’ sleeves as the season premiere, 'Broken' shows us what exists beyond the city limits of Storybrooke.