'The Vampire Diaries' 411 Review "Catch Me if You Can"


I’m going to jump right in by saying I wasn’t thrilled with this episode.


When American Horror Story ended last year, the most rampant complaint from fans had to do with what happened after the credits ran. To the viewer, there were so many open roads left to go down regarding the future of the Harmon family as they navigated the ghostly social stature of Murder House as well as whatever happened to Constance and baby Michael—the supposed anti-Christ. With the announcement that American Horror Story would be an anthology series following different characters in a different story each season, it became clear that these were questions that would hang in the ether forever. So this time, Ryan Murphy and co. went out of their way to make sure that no loose end would ensnare the further speculation of the fans of the Asylum arc. In doing so, they created a poignant, full-circle, and slightly disappointing final chapter to the tale of Briarcliff and everyone whose lives were tarnished by association with it.

One of this season’s most anticipated new series debuted tonight with an audacious, bloody, and instantly intriguing first installment that told the age-old story of good vs evil but did so with a twist that could only come from the age of social media. In fact it’s this concept that’s going to keep viewers glued to the screen for the next fourteen consecutive weeks—The Following will have no repeats or breaks which is the way all serialized shows should air. It essentially breaks down like so: what happens when a charismatic and diabolical famous serial killer uses his influence to indoctrinate his fans or ‘followers’ into enacting a series of acts on his behalf?
Read more »
Posted by Keysha C. at 10:27 PM 1 comment:


This week on Once Upon a Time we were treated to the backstory of Doctor Whale’s “fairytale” alter-ego.


This week on Revenge someone slips up big time, a character puts way too much stock in a video, Daniel makes me really uncomfortable and the Stowaway storyline refuses to go away.


An open letter to Bonnie Bennett:

Last week, Cora and Hook sailed into town and Cora stirred up some trouble for her daughter, Regina. Now it’s Hook’s turn as he seeks out his vengeance against ‘the crocodile’ Rumpelstiltskin by attacking him where he’s currently the most vulnerable.

If I present the episode like that then it won’t seem as unbearable as most of it was. That’s a trick I learned from Mr. Gold actually—telling a story the way that makes things suit your purposes even if it’s not entirely true. 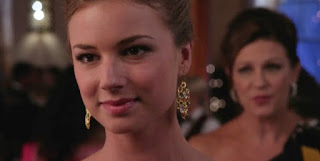 This week on Revenge we learned that if you’re going to spend a million dollars on wine, you should probably taste it first.

With only two episodes left after tonight’s installment, American Horror Story starts to close up the Asylum chapter by killing one major character, bringing three free from Briarcliff, and it allowed for the natural villain of this season to truly emerge as a number of themes from the first few episodes came full circle.

With only three episodes left after tonight, American Horror Story used its tenth episode of the Asylum arc to start putting a bow on storylines that have progressed through the season. Two major characters died, the power shifts were evident all around in the dynamic between characters whose stories have placed them together, and we all got the chance to see what would happen if the sensibilities of AHS met up with the song and dance numbers of Ryan Murphy’s other creation Glee, and had a plucky choreographed murder baby.
Read more »
Posted by Keysha C. at 11:10 PM 1 comment:

Who We Think Will Die on 'American Horror Story' Tonight

After a short hiatus, American Horror Story: Asylum returns to air the first of its final four episodes tonight on FX. Before the break, and again on today on Twitter, creator Ryan Murphy claimed that tonight will be the final episode for two of the show's characters. Immediately, the fandom freaked out on social media sites such as Twitter and Tumblr over the possibilities of who could meet their end, but with a little careful deduction we here at Beyond Fandom believe we may have solved the identities of these two characters.

Don't worry Kit Walker (and thereby Evan Peters) fans, we're pretty sure it's not him.