So last week on The Vampire Diaries I missed the memo that Jeremy is now considered a full-on supernatural being, considering he’s one of the Five and all.

Email ThisBlogThis!Share to TwitterShare to FacebookShare to Pinterest
Labels: The Vampire Diaries


The CW is a network that’s always been known to have its passionate fans, I’m looking at you in particular Supernatural and The Vampire Diaries fandoms.  And we all know there are certain parts of your fandom that are beyond over enthusiastic--that corner of the fandom the other fans shake their heads at because they others come off as more than slightly crazily into the show. So it’s only natural that a show that shines a dark light on fandom would air on this very network.  Enter Cult, two shows in one with a built-in fandom of people who put their energies into something far more terrifying than night blogging, instead they’re into abduction and murder.

Email ThisBlogThis!Share to TwitterShare to FacebookShare to Pinterest
Labels: Cult

Want to see Peter Petrelli as a vampire? Of course you do! 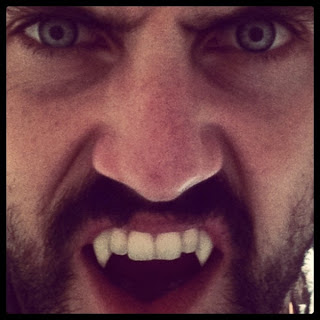 Check out the red-band trailer below from the JoBlo youtube channel:

We’re now five episodes into The Following and Joe Carroll’s master-plan continues to unfold—slowly. For a show that seems to pride itself on creating an atmosphere of general unease and suspense, surprisingly little happened in “The Siege” that you couldn’t have predicted on your own if you’d ever seen a kidnapping drama before. Tensions arose between the three lead antagonists( albeit for far more compelling reasons than the usual woes involving getting caught or dealing with ransom money as Jacob continued to struggle with his sexuality and lack of murder experience). All while newly deputized Ryan Hardy closed in on the farmhouse where the trio keeps Joey held against his will.

This episode highlighted what I think is starting to be a real problem in this series so far and that’s finding the right balance between fleshing out its characters and following through with the steps of the plan. Despite the chemistry between Joe Carroll and Ryan Hardy, the real intrigue in the show for many, especially after the events of last week, has been the twisted tale of Emma, Paul, and Jacob. Jacob especially with his reluctance to actually go through with a single kill as well as his pain and confusion toward his clear connection and attraction to both Emma and Paul has stood out as a character that offers something truly different in a show that trades in many clichés of the genre. But If there’s a whole other set of followers out there, with likely more to come out of the woodwork yet, then it’s become clear that the first trio could wind up being thrown into the meat grinder in the name of moving story forward which is a shame that one or perhaps all three will die to service that week’s ‘shocking moment’.

No offense meant to Kevin Bacon but there’s something about Ryan Hardy that just isn’t grabbing onto me the way the show would like. I get the whole ‘he’s broken and on the path to redemption unless his second go at Carroll ruins him permanently thing’ I do, but when those two aren’t sharing the same space like when Hardy is with the rest of the Feds it just feels like another procedural crime drama. That doesn’t speak highly for Hardy as a character if this is supposed to be his story but I can’t wait to turn the next page and have someone else’s POV take over.

Recently, I indulged in the entire first season of House of Cards, available all at once over on Netflix. I’m almost afraid that the freedom that series had to lay all of their Cards on the table at once by having the entire first season fully available has spoiled me toward the kind of plotting that The Following seems to be using even though it’s fairly standard on broadcast networks to stretch things out as much as possible. It’s a shame that a series like this has to play that game because it’s starting to affect the dramatic impact. You can feel in this episode especially how they’re holding back for next time, always next time. Joe Carroll smugly grins at the character sitting across from him (which is basically a placeholder for the viewing audience when the camera swings around to have Joe looking directly at us instead) as he promises them and us that there’s so much more to come. It’s more than a little infuriating right now to be left in the dark about it and I wonder if some viewers’ aren’t having their patience tried because of it. It’s worth wondering if a show like this would benefit from a similar model to that of House of Cards especially since people don’t really like to feel like they’re being jerked around when they watch something.

They also need to stop telegraphing out every single reveal so that no one gets confused by what goes down. I had to roll my eyes at the attempt of portraying body horror with Joe’s attorney during that particular reveal--it should have been a later shot in the series so that you’d have to put the work in to remember that the assailant in her office had the exact kind of tool that would have been responsible for her missing digits. I haven’t lost faith in The Following like I did with a show like Revolution which I meh-quit this year. That's sort of like rage-quitting but so much more apathetic. With The Following, I do feel that when the shit finally does go down, it could well be quite epic. Hopefully after the showdown at the farmhouse next week we’ll finally start to enter the next phase of Joe Carroll’s game instead of being assured that a next phase does indeed exist.


Tonight’s episode of Revenge was the one we’ve been speculating about since the season premiere.  We find out how The Amanda sunk and whose arm is floating in her wreckage.

Email ThisBlogThis!Share to TwitterShare to FacebookShare to Pinterest
Labels: Revenge

'The Vampire Diaries' 414 Review -"Down the Rabbit Hole"


This week on The Vampire Diaries... I stand by what I said last week when I said this episode and last week’s really should have been combined into one since all the interesting things happened in the last part of this episode, but I’ll get to that later.

Email ThisBlogThis!Share to TwitterShare to FacebookShare to Pinterest
Labels: The Vampire Diaries

Check into 'Bates Motel' with GetGlue to Unlock the Terror Within

As many of you know, GetGlue.com has become quite the popular social media tool for promoting new and returning television series. Recently, the new A&E series Bates Motel, a modern-day reimagining of the story of a teenage Norman Bates (Freddie Highmore) and his infamous mother Norma (Vera Farmiga), teamed up with Glue to promote the series premiere on March 18th by creating an interactive website that we at BeyondFandom just explored.

The site which can be found Here  puts you on a virtual tour of Bates Motel itself.


Throughout this season of Revenge we’ve seen Emily Thorne go on quite the emotional rollercoaster, but she almost always remained calm, collected, and closed off.  In tonight’s episode we see Emily be more raw than we have in two years.

Email ThisBlogThis!Share to TwitterShare to FacebookShare to Pinterest
Labels: Revenge

This week on The Vampire Diaries... well let’s face it guys, this entire episode was a filler episode.  Instead of ripping the lid off whatever was holding Silas by the end of the episode, we really ended not too far from where it began.  I can’t help but think in an earlier season we’d be moving along far faster, but instead we need another entire episode devoted to love triangles and seeing where everyone stands in terms of the cure.  Oh, and totally cementing that Shane is insane and evil--not that we hadn’t figured that out already.