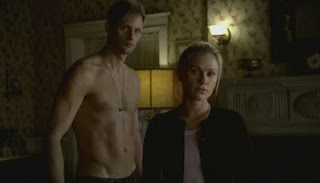 Finally, after a constant barrage of threats to humans, there is now a supernatural presence that can be considered a deadly force for the vampires of True Blood to reckon with.
No I'm not talking about King Bill and his apparent no-strike policy if a vampire is caught feeding humans on tape--instead the witch coven that made their first, albeit accidental, strike against the vampires last week. By removing most of Eric Northman's memory this nascent group of part-time Wiccans and one really pissed off old magical entity have made their mark as something the vampires of this show will actually fear. It takes a lot of power to alter the mind of a vampire so old as Eric and it's something that the coven's leader Marnie is foolishly opening herself up to by the end of the episode.

But that impending vampires vs. witches stand-off is big picture because for Sookie, this whole development only means that she has another vampire-related pain in the ass situation to handle. She has to deal with an Eric who knows he's a vampire and has memories of his homeland but that's about it. It's a truly fascinating position for Sookie to be put into where she has the ability to hold some decent degree of power with a man who has so delighted in making her as uncomfortable as he could to keep the power where he likes it, on his end of things. Take for example the issue of who currently owns the Stackhouse house--without much pause at all Sookie took the opportunity to try and convince an unaware Eric that it was still her house and he must be invited in. Once Pam showed up to find what was left of her maker willing to keep her at bay in the name of protecting Sookie, that brief illusion of Eric being a guest in Sookie's own home was broken. I'm sure Sookie will have other chances with Eric in his current condition to try and assert a sense of power again with him.

As for this version of Eric, he's pleasantly still dangerous even if he'll apologize after any wrongdoing with a sheepish grin that suggests, 'well, he just didn't know any better.' That's certainly the attitude Sookie is trying to remind herself to have toward him, especially in a wonderful scene down in Eric's cubby where he tries to ascertain if she is his or if she would like to be. What's going to be great to see in the coming weeks of this plot are the ways in which a person's feelings can change toward another once the former person has lost a few of their less desirable personality traits. Sookie clearly doesn't miss Eric's former leering, but she's fond of having a vampire about to keep her safe--even if she won't admit she'll eventually need it. Even when he eventually regains his memories--I think Sookie's attitude will have changed toward Eric in a more favorable manner.

Pam's forced to embark on a one-woman mission as she is about the only person who can go about trying to find who did this to her beloved maker and fix him. She doesn't trust Bill as it was his order to get Eric there in the first place--likely with some knowledge that the witches would attempt something against him, and I'm certainly inclined to agree with her. Based purely on the two vampires' contentious past--particularly Eric's concrete bath in season three's finale. If it were up to Bill, Eric would be cement-block buddies with Russell Edgington, but this probably seemed like a good blame-free way to get him out of the picture. Unfortunately for Bill, his actions are only going to wind up pushing his ex and his enemy closer together. Nice move there, King Bill.

While Sookie has her hands full with witches, vampires, and returning werewolves (hey Alcide and your delightfully insane though supposedly born-again/cleaned up girlfriend Debbie). Her brother Jason has his own serious set of problems to deal with. All three of the aforementioned groups are dangerous, but he's dealing with a caustic cocktail of dangerous and bat-shit crazy as he remains the prisoner of the same group of in-bred were-panthers he had been trying to help. But the hillbillies of Hotshot have only one interest: to keep the were-panther line going and make it strong once more. The way in which they've decided to go about doing this is painful to watch because of the absolute terror in Ryan Kwanten's portrayal of this hellish nightmare. It is also about the most fitting karmic retribution a character like Jason Stackhouse could possibly receive. This is a character who womanized and threw himself around like an absolute man-whore and now? Well he's being treated in a manner that he's pretty much treated countless women over the years, even if he was innocent of devious intent to make any of these women feel used. Plus, it's a nice twist to have one of the few non-supernatural characters on the show get a taste of this perspective with his eventual turning at the full moon.

Elsewhere in Bon Temps (Or Even Shreveport)