For Southland's John Cooper, It Got Better

*Spoilers for the latest episode, 'Legacy'* 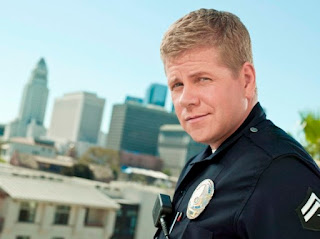 "I got a lot of problems kid, being gay isn't one of them."

Over the past four seasons Officer John Cooper has been Southland’s most intriguingly guarded character. Every other character has had their personal lives delved into directly either in the form of story-lines such as Sammy’s marriage falling apart or the scenes that involve Lydia and her mother. But John was always more of an enigma and one that Ben Sherman, his trainee, tried to illuminate for himself and for viewers. It wasn’t until the show began its new life on TNT that we really got the chance to get down and dirty with who John Cooper really was.
At that time he was a man with a severe pain medication addiction and an even more severe chip on his shoulder. But now that he’s gotten his back taken care of (for now), we’re getting to see another side of Officer Cooper that couldn’t be presented when he was still holding Ben’s hand.

I have to go through all of this ‘he’s come such a long way as a character’ stuff all just to say that Michael Cudlitz had his best episode yet playing John Cooper tonight. This is even coming from somebody who was a big fan of the more showy addiction storyline Cudlitz kicked the dramatic ass of last year. But what Cudlitz brought to the table tonight was this sense of honesty, understated but authentic caring, and dare I say even a moment of inner peace as Cooper faced one of the toughest calls of his twenty-two year career. Anyone who paid attention to the cold open and to the domestic disturbance call at the forefront of the episode could probably put it together that the young boy, Mike, was going to be the jumper by episode’s end. Mike’s reason why he wanted to end it struck close to home for Cooper in yet another fantastic example of how the cases on Southland perfectly mirror the lives and beliefs of the cops that take them on.

Mike’s sexuality was exposed by someone at his school and he bravely still wanted to go even though he knew that the possibility of getting bullied for being gay was high. When Cooper first met up with the teenager he encouraged him to do what he wanted which was to go to school despite the fervent wishes of his parents not to for fear of their son being ostracized or harmed. Later on, when the gut-wrenching image appears of a bloodied Mike standing on a building’s ledge in a dress that a pack of his peers forced him into, it’s a smack in the face to the optimism that some viewers (or Cooper) may have held about the teen’s fate. Cooper runs over to him and he doesn’t even have a second thought toward confessing his own sexuality in order to try to sway the kid to believe that if he doesn’t give up it will, in fact, get better. Mind you he was not alone when he said it either Cooper’s current partner, Officer Tang (Lucy Liu), was within earshot But none of this mattered if it meant saving someone’s life. It was also a true coming out of sorts for Cooper as the only other time this had been hinted at was when he was shown in bed last season with a man was still sleeping next to him—it wasn’t anyone’s business and he never spoke about it.

Despite lunging for Mike and literally pulling him off of the edge the young teen’s story still ended badly later on when he took his life in the hospital. Upon hearing the news, Cooper didn’t torment himself over it as he would have in the past. Instead he took on a very healthy way of looking at it. He could fight for someone else, but if they didn't want to fight for themselves then he'd done at least he'd done his part.

In the last shot of the episode Cooper stands in the alleyway outside of the bar where his fellow officers were celebrating Cooper’s twenty plus years of service over some beers. When he left the bar they were still singing his praises, and that’s the most any cop might ask for, to be remembered for the job they did to the best of their ability no matter what their private life was like. Even if the others were made aware of his sexual preference, Cooper has always been such a 'cop's cop' that you would truly hope that no one would turn on him just because he wasn't out chasing badge bunnies like his former boot, Ben. You can see in his eyes that Cooper would hope that too, but it remains no one else's business as he walks out onto the streets that during the day he does his best to protect and serve. For John Cooper on Southland this season it truly has gotten better, and it’s going to be a treat to see how the rest of the season plays out for this complex stereotype-busting character and the criminally underrated actor who plays him.
Posted by Keysha C. at 10:03 PM