Revenge: Death on the Beach and A New Chapter Begins

In a word, I approve.

*There are spoilers here, tread lightly* 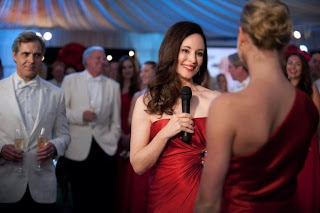 Those were the closing words of Victoria Grayson’s speech at her son Daniel’s engagement party, and they also describe my personal feelings toward this heart-stopping tense hour of television. Let me be clear that I’m sad to see the person go whose body it wound up being on the beach in the pilot episode’s cliffhanger that saw us through to this point, but it’s definitely an excellent choice for the creators to have made for future story purposes. All the awards go to this creative team and the network that supported them enough to maintain one helluva of a mystery throughout most of this freshman drama’s duration. But now that almost all of the cards are on the table, a new chapter of Revenge can begin once we discuss the events of 'Chaos'.


Throughout the hour all of our favorite characters were subtly put into their new places on the game board. We even got the return of bat-shit crazy (but hugely entertaining), Tyler Barrol as from the first few moments of the episode it was clear that he was the one snooping around Emily’s hiding place. He has her box of secrets, as well as Amanda herself, stashed away when he calls Emily to make a ransom drop for both. As if having our big murder mystery party go down in this episode wasn’t enough drama the drop goes down and Emily gets double-crossed by Amanda who’s decided to unwisely pair up with Tyler. Amanda has never been the sharpest tool in the shed, but in this episode she reached new levels of her capacity to be fully manipulated by others. In fairness to her I will admit that she is pretty out of her league when it comes to this pack of deceitful double-crossers she’s playing with, but really no one saw this temporary partnership ending well. Even when he had the money Tyler wasn’t going to miss the biggest social event of the year—or of that week, as he planned to murder Daniel and pin it on Emily to finally take her down for framing him for the murder of former Grayson bodyguard Frank Stevens.

Other bits of story for our characters include Charlotte dealing badly with the truth of her parentage, the Graysons having a slight truce with one another involving their divorce settlement, and Jack wanting to get the hell out of dodge before he winds up in the chaos we're waiting for at home. Except that doesn’t wind up happening and again I shake my fist at the screen that Amanda led Jack right into the bloody fray.  Soon all the key players, plus our unknown variables we didn’t see at the party in the pilot (Tyler, Amanda, and Emily’s sensei Mr. Takeda), are right where we need them to be as the party plays out. The use of scenes we’ve already viewed plus new pieces here and there made the ultimate outcome unpredictable and yet…not very. 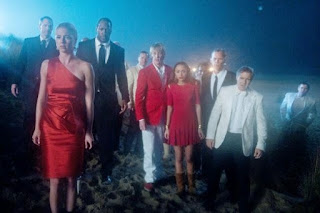 Let’s be honest, for all the time this has been hyped up in magazines and online, it was always very doubtful that they were going to have it be as it seemed with Daniel taking those bullets. My initial reaction to the outcome of it not being Danny’s body on the beach was admittedly one of disappointment that they didn’t have the balls to off a beloved main character (or an actor with magazine cover  potential) after getting entangled in Emily Thorne’s web. But in fact his fate is going to be so much worse really now that Tyler is a corpse. The 'new' murder mystery involves a blood-soaked confused Daniel wandering over to the crowd of people at the party, aka witnesses, and his shocked mother telling him to ‘say nothing’. Now Emily will have to experience Daniel’s life being ruined without having to lift a finger as her actions throughout the season so far have already caused him to get to this place. Not to mention, Jack handled the body when he chased a clearly scared (and wounded?) Amanda down to the beach. As for Amanda, she got herself a ride with Mr. Takeda which will no doubt have consequences that have yet to be seen.

Two weeks seems like an eternity to wait for new episodes but there’s certainly no doubting that we’re on a very dark road now on this show. Emily’s commitment to ruin the Graysons has caused the circumstances for Daniel’s life to fall apart. From the promos, as well as the photo Tyler handed off to Daniel before their deadly altercation took place, it seems that Daniel’s going to get ever closer to finding out the truth about the woman he loves, and what her true intentions are in the Hamptons and with his family. That may in fact wound Daniel far more than anything else he’s experienced so far. This path of revenge is truly about to get nasty for everyone on this show, Emily included as her plans are clearly getting out of her own hands now.
Posted by Keysha C. at 12:14 AM