Tonight’s episode of Once Upon A Time dealt with a family that’s been torn apart across two vastly different lands trying to get back to each other and keep themselves safe from the dangers of both lands while doing so.  We were given the chance to see far more of what’s left of the Enchanted Kingdom, there was a touching reunion between one of our favorite OUAT characters and their dearest loved one, and there were also ogres which are apparently far more deadly than giants even though they’re blind as can be and hunt only by sound so maybe a certain character shouldn’t be playing around with her gun in this far-off place. For the sake of narrative clarity, each part of this recap will separately deal with the three places our story currently takes place: Enchanted Kingdom past, Storybrooke present, and Enchanted Kingdom present.

The battle lines are drawn as King George continues his assault against Snow, Charming and their people when we head back to the flashback of the episode. Red comes back from a scouting mission to inform the others that not only are the King’s troops bearing down upon them but that there is a new general leading them—they call him the Leviathan and claim he’s dangerous for his stealth and strength. It turns out later on when Snow meets up with this Leviathan that it’s a game of telephone gone wrong as he’s truly Lancelot—formerly a knight of the round table—played by Teen Wolf star Sinqua Walls. Lancelot performs his task and brings Snow back to King George. They chat briefly and George has Lancelot fetch something for Snow to drink. It turns out that George fell in love so he understands the pain and pleasure that having a true love can bring to one, however her womb is barren and apparently if a woman can’t conceive in that land she’s not worth anything. So George cursed Snow by poisoning her drink, unbeknownst to Lancelot, and now she too will never have a family with Charming.

The King’s men dump Snow White back into the woods afterward where she’s quickly encountered once more by Lancelot. She’s distraught that George did this to her and Lancelot swears he had nothing to do with that. He mentions that the reason he was kicked out of being part of the round table has to do with a woman but that’s the only vague clue to his backstory (or the world of King Arthur) that we get there. He also promises to help Snow and warns her that they have to get to the cabin of Charming’s mother since King George’s men are on their way there now.

Before they arrive, Charming and his mother have a sweet moment where they talk about how eager he is for her to meet his true love, Snow. But things go south quickly when George’s men arrive and attack. Charming easily handles them and it’s still pretty great to see him in full on ass-kicking fairy tale prince mode when the camera pans over and we see his mother took a stray arrow. Just as Lancelot and Snow arrive the battle is over but Charming’s mother is going to die if they don’t do something—the tip of the arrow was poisoned and it’s in her bloodstream. Charming suggests using the magical waters of Lake Nostros in order to restore his mother. He mentions having seen the magical properties of the water work first-hand before (season one callback) and so they set off for the lake.
Only when they arrive it’s nothing but a husk of its former self from when Charming killed the lady of the water…all they can find is a single small sip of water stored in the curve of a shell on the dusty surface.

While Lancelot and Charming search for the water, Snow and Charming’s mother get the chance to talk and his mother realizes that King George cursed Snow’s womb. So when they find the water she fakes taking a sip then claims it doesn’t work since Snow refused her attempt to give it to her instead. Charming’s mother somewhat tricks them into getting married so she can see it before she dies and with Lancelot’s help slips the magical water into their wedding chalice so Snow will drink it. By the end of the episode, using a pendant that belonged to his mother, Charming and Snow are shown to be expecting and from the way the pendant swings it’s going to be a girl. They also commit to keep fighting and take the kingdom back.

In present-day Storybrooke Henry has already come up with a name for he and his grandfather’s attempt to get Emma and Snow back—operation Cobra is so last season, it’s operation scorpion now. Charming doesn’t want Henry in harm’s way so he tries to get him to go to school while he worries about trying to restore the hat since Jefferson refused to help him last week. But we all know precocious kids certainly have no want to sit in a classroom all day even though if you think about it he’s going to be attending school now with all the fairytale children from his books. So Henry takes matters into his own hands to try to find a way to help Emma and Snow.

First, he finds Jefferson sitting on a bench anxiously looking at a notice from his daughter that features a sketch of himself with the words, ‘have you seen my papa?’ on it. Henry gets the chance to speak with him about how he should put aside his fear that she’ll hate him and just go to her. Henry knows all about this sort of thing and he tells Jefferson that something is better than nothing and that Grace is probably eagerly waiting for him to come back. It really makes you think about how many of the newly formed families that were put together because of the curse are breaking up and rearranging themselves. How awkward and even painful it must be for the children and parents to not belong to one another anymore.

Next, Henry tricks Regina into a lunch-date so he can sneak into her office and get her massive ring of keys. He uses them to head down into Regina’s mausoleum of secrets and tries to find something he can use in there. Instead he finds two nasty snakes in a box and Charming waiting for him. Regina got ahold of him when she realized Henry stood her up and her keys were missing. It’s funny how their strange arrangement actually works out for Henry’s well-being or as Emma referred to the group parenting of Henry over in her part of the episode: ‘I kind of share him with Regina, it’s complicated’.

Henry explains to Charming about how he’s disappointed that life for him is still basically the same but now his mother is gone too. How he thought when the curse was broken he would be living in a magical land, riding horses and fighting dragons. After they leave, they witness the tearful reunion of Jefferson and his daughter Grace. She’s not mad at all just relieved that her papa has come back to her. Sebastian Stan will make you cry if you watch his face during. 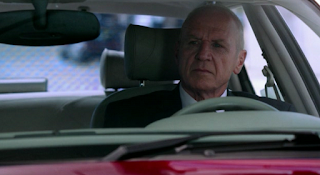 There’s a cute moment afterward where Charming presents Henry with a gift of two wooden sparring swords that they then fight one another with. As they spar we see King George in the present day (he was the district attorney in S1) and he’s looking at Henry with great interest. Seems that Charming needs to watch his back since all the villains of the Enchanted Kingdom know exactly who they are and what their enemies love most.

Snow, Emma and Cora are still in the hole when we pick up in this part of the plot. Cora’s talking to Emma trying to convince her that she’s a victim of her circumstances and she informs her that she’s Regina’s mother. Snow wakes up and immediately thrusts herself between the two as she protectively warns Emma about how awful Cora truly is. Mulan shows up and tells them they’re to meet with the leader of their group. It turns out to be Lancelot and things instantly get better for our duo trapped in another land. He hears Snow out about wanting to try and find a way back to Storybrooke, perhaps by using the wardrobe that was made to send Emma into our world in the first place.

Snow and Emma are allowed to go search the ruins of their former home with Mulan alongside them. Aurora shows up and tries to get her vengeance against Snow only to find her ass thrown on the ground so fast to no one’s surprise as Snow tells her to lay off and find a better way to channel her anger about what happened to Prince Phillip. After an encounter with an ogre where Snow’s protective nature over Emma is shown in the form of her awesome archery skills, they wind up at what should have been Emma’s childhood home. It’s an emotional moment for Snow as she stands there in the ruins of what was meant to be Emma’s nursery.

They quickly realize that wardrobe doesn’t seem to have much magic at all left in it before Lancelot surprises them by showing up. Unfortunately, that isn’t and never was Lancelot it was Cora in disguise the whole while trying to gain their trust so she can find a portal for her own wicked means. There’s a quick struggle and Emma makes the choice to set the tree the wardrobe is carved into on fire so no one can use it. Cora vanishes, frustrated, but she reappears later on when the others leave. She collects the ashen remains of the wardrobe—ash always has magical properties so now she may have something she can use to help get into our world. Mulan declares that Snow lead them since Lancelot is gone and she accepts at least until they can find another way home. I’m glad they didn’t draw out the idea of Snow and Emma as prisoners and threats for long when there are bigger fish to fry for these people who somehow weren’t affected by the 'no more happy endings' curse.

Both Snow and Charming have been placed into leadership positions in their respective lands now. They committed in the past to bring the kingdom back together and keep it safe from harm and now that’s exactly what they’re doing albeit without the help of one another. Emma is finally getting the chance to realize what it means to have her mother by her side and it’s giving her a chance to grow as a character. Next week: Hook is coming and I swear I couldn’t possibly be any more excited for a fictional character to appear than I am for Mr. Killian Jones (Colin O’Donoghue).