Who We Think Will Die on 'American Horror Story' Tonight

After a short hiatus, American Horror Story: Asylum returns to air the first of its final four episodes tonight on FX. Before the break, and again on today on Twitter, creator Ryan Murphy claimed that tonight will be the final episode for two of the show's characters. Immediately, the fandom freaked out on social media sites such as Twitter and Tumblr over the possibilities of who could meet their end, but with a little careful deduction we here at Beyond Fandom believe we may have solved the identities of these two characters.

Don't worry Kit Walker (and thereby Evan Peters) fans, we're pretty sure it's not him.


If this show aired a few years ago, then it really would be a hugely suspenseful mystery as to who dies on tonight's episode. However, this is the age where promotional materials spoil basically everything all the time from surprise guest stars to big plot-twists on various genre shows. With that in mind, check out the synopses for the two episodes following tonight's "The Name Game" compliments of SpoilerTV.

First off, Kit is mentioned right away in the following episode so despite the situation he found himself in at the hands of Dr. Arden before the break, it seems as though he'll be fine. For now. Grace too is mentioned as well as Dr. Thredson, Jude, and the Monsignor who also wasn't in the best position before the break. Again, if you watch the promo for tonight's episode the answer to that supposed cliff-hanger resolves itself, Timothy Howard is shown to be just fine after his crucifixion at the hands of Ian McShane's Leigh Emerson.

So who does that leave? Well, Lana isn't mentioned in any of these synopses, but digging a little further gets you recent set photos of Sarah Paulson and Zachary Quinto shooting scenes together. Lana looks quite well-put together and her baby bump is visible so nothing is going to happen to her tonight. 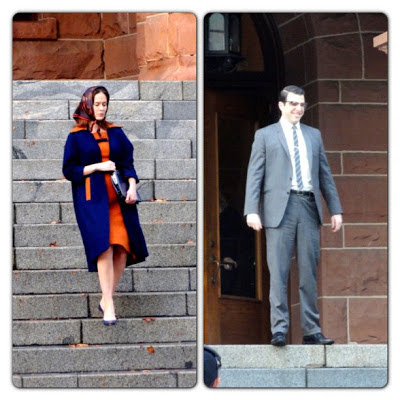 Which brings us to our guesses based on the evidence we've been able to find, it would seem that the two characters on their way out of the Asylum are:


Let's take a look at why that might be:


Agree? Disagree? Sound off in the comments below and let us know who you think it might be.